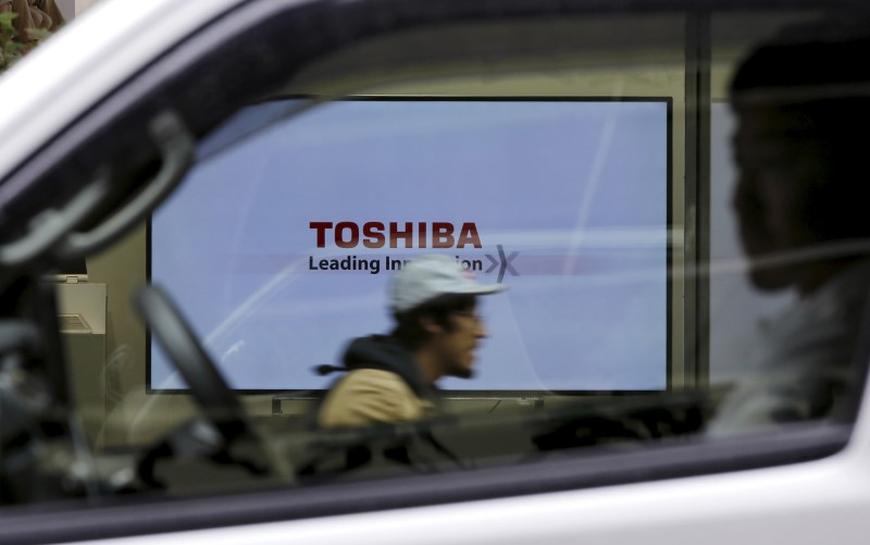 A Toshiba Corp logo displayed on one of its television sets is seen through a vehicle in Tokyo, Japan, November 26, 2015.

TOKYO Toshiba Corp, in a hurry to raise cash before closing its books for the business year that ended at the end of last month, was able to structure the sale of its medical equipment business to Canon Inc in an unorthodox way so that it could book the 665.5 billion yen ($5.95 billion) proceeds before the deal had been approved by regulators.

It meant that the storied Japanese conglomerate, which has been struggling following an accounting scandal, can get a fast and badly needed infusion of capital at a time when it is concerned about risks of insolvency and is looking for money to restructure.

But to rival bidder Fujifilm Holdings Corp, the maneuver, if accepted by the authorities, “would make a mockery of the law.” In a statement, Fujifilm added that “it is a method that companies like ours, with open, fair and clear policies, could never consider.”

And to some antitrust and accounting experts it is also questionable, though they acknowledge it probably doesn’t breach any regulations. Japan’s anti-monopoly law requires a buyer to seek approval from the Fair Trade Commission for a deal only if it has 20 billion yen or more in annual sales.

In this case, though, Toshiba didn’t sell Toshiba Medical Systems Corp directly to Canon but instead sold it to a special-purpose vehicle with just $300 in capital that was created just to conduct the transaction.

By using this vehicle, known as MS Holding, the deal could initially pass under the radar of antitrust authorities.

Toshiba declined to comment on criticism that the deal was structured to evade antimonopoly scrutiny. “WONDERFUL PROPOSAL”

Toshiba, famous for everything from laptops to nuclear power stations, also arranged with Canon for the imaging company to front up the money before the deal has got the green light from regulators.

Canon has paid for the rights to acquire all the ordinary shares of Toshiba Medical and said in a filing with the U.S. Securities and Exchange Commission on March 30 that those rights are exercisable once the deal has been cleared by antitrust authorities.

Toshiba Medical had restructured its shares in the day before the deal was announced on March 17, separating the voting rights from the shares, to enable the deal to be structured in this way. This step allowed Toshiba to transfer voting control over the medical unit to MS Holding.

Last month, Toshiba was forecasting that it would only have shareholders’ equity of 150 billion yen, or just 2.6 percent of assets – “a severe figure” that could turn negative if any further risk were to materialise – Toshiba CEO Masashi Muromachi told a news conference on March 18.

“We wanted, somehow, to recover our shareholders’ equity,” Muromachi said. “In the midst of this, there was this wonderful proposal from Canon,” which both companies vetted with their lawyers, he said. A spokesman for Toshiba said that “confidentiality requirements prevent us from disclosing more details of the transaction.”

Canon acknowledges that the way the deal is being structured is not ideal. “We don’t think this scheme is the best in all circumstances, but it was important for this deal to be done quickly and in an ensured manner,” a spokesman said.

He declined to say if there is any agreement between Canon and MS Holding or provide further details on the deal. He said the three MS Holding directors and shareholders were independent of Canon.

According to a Toshiba press release, MS Holding the three shareholders are also its only staff – the former head of trading house Sumitomo Corp, a veteran lawyer and an accountant. But apart from that and the miniscule size of its capital little else is known about the vehicle. All of the three equally own 33.3 percent stake in MS Holding.

A company committee has been in discussions about replacing Muromachi with Senior Executive Vice-President Satoshi Tsunakawa, a source familiar with the matter told Reuters on Sunday. Muromachi has previously said that he wanted to step down after ensuring Toshiba was on track to recovery.

Toshiba’s share price cratered by 57 percent in the just-ended business year, the third-worst performer in the Topix 500, as revelations of eight years of accounting irregularities mounted. A raft of top officials resigned and now it is preparing to write down the value of its stake in U.S. nuclear subsidiary Westinghouse by around 200 billion yen, sources familiar with the matter told Reuters last week. Japanese media reported the figure could be about 300 billion yen.

The impact of the actions on Toshiba’s earnings and balance sheet will be reflected in its fourth quarter results, due in the next few weeks, if the company books the proceeds in that period.

Engineering the deal in this way creates risks for Canon as it pays for the assets before it gets control of them, said Yasuo Daito, a lawyer specializing in antitrust issues at Nozomi Sogo Attorneys at Law in Tokyo. Canon and Toshiba declined to comment on any such potential risks.

The FTC could theoretically impose a fine over procedural irregularities, but that is unlikely as such fines are very rare in Japan, Daito said.

Canon borrowed the payment through a short-term bank loan due to be repaid at the end of September, by which time it will decide how to finance the final transaction.

Accounting experts say that while the scheme may not breach any specific rules it does run against the principle of transparent accounting because booking the proceeds now doesn’t reflect when the assets are actually transferred to the final buyer and the deal is completed.

“The scheme is slipping through a set of accounting rules regarding special-purpose vehicles,” Yuji Hosono, a certified public accountant experienced in corporate auditing, said. “It’s compliant, but goes against the principle of accounting,” he said, noting that the proceeds from the sale should in principle be booked when the deal is complete in the fiscal year that has just started not last year.

Toshiba gave Canon exclusive negotiating rights for the medical equipment unit despite competing interest from Fujifilm and a team of Konica Minolta Inc with European buyout firm Permira. Canon did offer more for Toshiba Medical than other bidders, one source said at the time.

What Toshiba and Canon have done “was not illegal because they found a legal loophole,” said Shinichiro Abe, partner at Kasumigaseki International Law Office, who specializes in anti-trust laws. “In order to close this hole, there may be a need for the authority to set up a new rule in the future.”