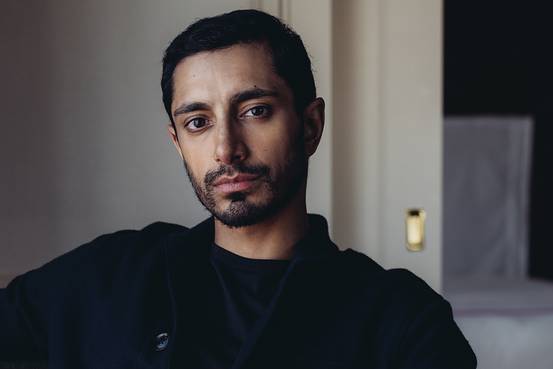 
LONG BEFORE BRITISH ACTOR and rapper Riz Ahmed made a career of role-playing, he was already navigating competing identities. “There was a bit of a jump between home and school, both culturally and classwise—I often found myself pinballing between different versions of myself,” says Ahmed, 34, about his teenage years. “I guess, in a way, I was sort of acting from a young age.” In those days, Ahmed moved between the working-class London neighborhood of Wembley, where he was raised, to the more privileged setting of Merchant Taylors’, a prestigious secondary school in Northwood. To watch Ahmed on-screen now—most recently in the critically acclaimed HBO crime miniseries The Night Of and this month’s highly anticipated Star Wars film, Rogue One—or to listen to his deeply honest rap songs is to bear witness to a tremendous range.

As the youngest child of Pakistani immigrants (his father freelanced in the shipping industry, and his mother was a homemaker), Ahmed used playacting early on to grab his two older siblings’ attention. “I was a kind of hyperactive, naughty loudmouth. I was always doing impersonations or running around the house acting out pretend films,” he says. In 1993, when he was 11, he received a government scholarship to attend Merchant Taylors’ but soon discovered that despite being a social leader among his peer group he still felt like an outsider. Occasionally, he would skip school to hang out with friends whose backgrounds more closely reflected his own. Together, they immersed themselves in the blossoming Asian street culture of ’90s London, a new generation of creatives ushering in hybrid forms of cinema, music and fashion. “We used to have club nights in the middle of the day because the South Asian girls weren’t allowed out at night,” he says. “So on the last day of term, all the Asian kids in London would go to these daytime raves.”

It was an empowering time for Ahmed and his friends, as they witnessed the mainstream growth of figures like British-Indian musician Bally Sagoo along with the BBC South Asian sketch show Goodness Gracious Me. In the aftermath of 9/11, all that changed. “A lot of South Asians retreated from arts and culture partly as a result of a spike in religiosity and the increased scrutiny the community faced,” Ahmed says. “It meant that it took a certain self-confidence, particularly if you were from a second-generation immigrant family, to roll the dice and decide to become an artist.”

In 2001, Ahmed enrolled at Oxford University, where he studied philosophy and politics. During his free time, he hosted raves and continued to make a name for himself as Riz MC, engaging in rap battles and freestyling on pirate radio stations. Despite his extracurricular success, he again found himself plagued by the sense of not belonging at school. “The first person I met there told me I reminded them of Ali G—and they meant it as a compliment,” he says. Ahmed briefly considered dropping out before determining that perhaps he could make the most of his time there on his own terms. He co-created a club night called Hit & Run, which became an instant success among the student population—so much so that he was able to pay the rest of his way through school.

At Oxford, Ahmed also began to focus on acting, appearing in a number of theater productions. In 2004, the renowned theater producer Thelma Holt witnessed Ahmed’s turn as Cassius in Julius Caesar and offered to help him raise money for drama school. He studied acting at the Royal Central School of Speech and Drama before landing his first major role in 2006’s highly praised film The Road to Guantánamo. “I started acting when they needed people that looked like me, but I wasn’t interested in some of those projects,” says Ahmed. “Then this project comes along, this needle in a haystack.” He followed that performance with a slew of other memorable roles, including that of an anxious cameraman in the Academy Award–nominated film Nightcrawler, opposite Jake Gyllenhaal and Rene Russo, and a Pakistani academic in The Reluctant Fundamentalist, alongside Kate Hudson.

This year has proved Ahmed’s busiest yet, with parts in the latest installment of the Jason Bourne series and in the HBO phenomenon The Night Of, in which he played the son of a Jackson Heights taxi driver, caught at the center of a murder investigation. It is a character he brings to life with nuance, highlighting the flaws in the criminal justice system and the devastating toll it can take on the convicted, both innocent and guilty. “We shot for nearly a year, and Riz never tired of that long process,” says Night Of director Steven Zaillian. “There are a lot of scenes without dialogue—Riz was comfortable with that, able to express himself just by being in the situation and making it real. Not everyone can do that.”

Ahmed received the script from his agent while boarding a plane after the Venice Film Festival. “He said, ‘You have an audition as soon as you land,’ ” Ahmed says. “I wasn’t that nervous, because I knew so little about it. I wasn’t even that familiar with HBO’s serials.” That experience taught him a crucial lesson—to allow his instincts to lead instead of approaching a role strictly analytically or academically.

It’s a lesson he has also incorporated into his music, which is evident on Cashmere, his debut album with Swet Shop Boys—a rap duo that also features Himanshu Suri (aka Heems), the Queens-based rapper formerly of Das Racist, whom Ahmed met while researching his role in The Night Of. With their producer, Redinho, they recorded the album in five days earlier this year at Ahmed’s London flat, embracing an improvisational approach reminiscent of freestyling. On tracks like “T5” and “Shottin,” Ahmed and Heems rap about racial profiling and the police, recalling the socially aware, impassioned lyrics of artists like Nas and Tupac, whom Ahmed cites as influences. But he rejects labeling Cashmere a political album. “For me, it’s a celebration of mongrelhood, of the 99.9 percent of people in the world who feel like they’re somehow in between the binary identities the world imposes upon them,” he says. “I just want to fly the flag for everyone who feels like they don’t necessarily fit in.”

And with three major films in the pipeline, Ahmed has hit his stride. He plays Bodhi Rook, a former Imperial pilot assisting the rebels, in this month’s Rogue One, the first stand-alone movie from the Star Wars franchise (“One of my earliest memories of film was watching Star Wars with my brother,” Ahmed says). He also holds the lead role in the upcoming detective thriller City of Tiny Lights and appears in the edgy drama una, starring Rooney Mara and Ben Mendelsohn. Despite the growing recognition of his work, Ahmed remains driven by the desire to transcend cultural and societal limitations. “A lot of British films and TV resort to period drama,” Ahmed says. “But I believe our best stories aren’t behind us. They’re happening right now. They’re ahead of us.”