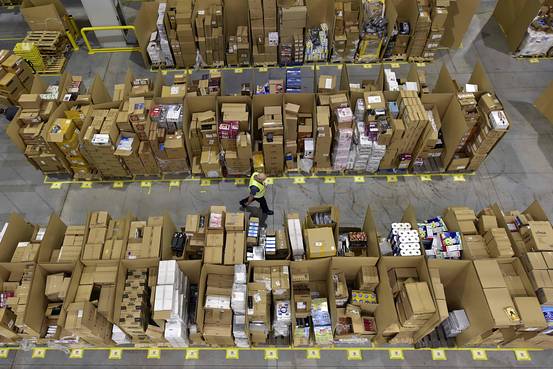 
Black Friday and Thanksgiving are continuing to gain on Cyber Monday as online shopping bonanzas.

On Friday, Amazon.com Inc. said that Black Friday and Thanksgiving orders are on pace to surpass the same two days last year, thanks to more mobile shopping and a surge of discounts.

While online retail used to be focused on Cyber Monday, “this is not about one day of online shopping” anymore, said an Amazon spokeswoman. Instead, the online hunt for deals is now becoming “much broader, all season long.” Amazon started offering holiday deals on Nov. 1 and new discounts are posted every day, sometimes as often as every five minutes.

As a result, retailers and delivery companies have been gearing up for the earlier kickoff to the online holiday shopping season, instead of when people return to the office after the long Thanksgiving weekend. That means plenty of online orders will be packed up and making their way to United Parcel Service Inc. and FedEx Corp. this weekend.

“Today and Monday are two of the biggest shipping days of the year,” said John Haber, chief executive of shipping consultancy Spend Management Experts, which works with retailers. “It’ll set the tone for the holiday season.”

Cyber Monday has historically been the biggest shopping day of the year on Amazon.com, but Thanksgiving and Black Friday come closer to catching up each year, a spokeswoman for the Seattle-based online retailer said. Last year, more people shopped online than in stores during the Thanksgiving weekend, according to the National Retail Federation.

Thanksgiving is becoming one of the biggest mobile days on the site, as consumers increasingly prefer shopping on their phones while on the road, visiting family or sitting at the dinner table. Orders placed on mobile devices this year exceeded those placed on Thanksgiving or Cyber Monday last year.

Shoppers are also on track to order more items on Amazon this Black Friday than last year, the retailer said. Among the best-selling items Friday were a 7-in-1 multifunctional cooker, Hasbro’s Pie Face game, and some HD headphones. The company also said shoppers bought more than 100,000 toys on the site between midnight and 3 a.m. Amazon had expanded its product offerings ahead of the holidays by 30%, the equivalent of 3.6 million new products, according to 360pi, a retail pricing and assortment tracking firm.

Some shoppers hit the stores Friday as a precursor to shopping online.

Debbie Sanderson of White City, Ore., drove about 20 minutes to the Rogue Valley Mall to do some early morning shopping for her eight grandchildren. Though, she said, “Actually it’s been for me so far,” including purchasing a blanket and a shower curtain.

By shortly after 7 a.m., she was already wrapping up her in-store purchases and heading back home to do more shopping on Amazon. She had spotted a Black Friday deal for a TV she planned to buy for herself, and she was expecting to purchase Amazon gift certificates for her grandchildren.

“That way they can shop for themselves” and experience the fun of waiting for a package to arrive, she added.

Up until a couple of years ago, James Seatter, 24, would hit the stores with his family on Black Friday, but now all the deals are available online. While visiting his family in Baton Rouge, La., this week, he has purchased a vacuum cleaner on his phone from Amazon.com and gifts for his dad on BrooksBrothers.com. He plans to continue his online shopping Monday when he returns to his home in Houston.

Mr. Seatter said he plans to do all of his shopping online this year “because of the crazies,” he said. “I don’t want to fight with someone over a toaster oven at Wal-Mart. It’s just easier to do it online, on my time so I don’t have to fight the crowds.”

The big challenge for online retailers and delivery companies will be ensuring those online orders are sent and delivered on time.

Amazon this week experienced some hiccups to its logistics plans after pilots at one of its partner airlines went on strike for two days. A judge ordered them back to work late Wednesday, but further disruptions may arise due to a long-running labor dispute between the airline and pilots.

Last year, a flood of online orders following Thanksgiving clogged both UPS’s and FedEx’s networks, particularly in the Northeast. And in 2013, bad weather and an early surge in online holiday shopping got the carriers off to a bad start, finishing with millions of packages arriving after Christmas Day that year. Those problems cost UPS alone $200 million, the carrier reported.

In good news for the delivery companies, the weather so far seems to be cooperating—something that can be a wild card for on-time holiday deliveries. “It’s very important for the carriers to get off to a good start,” Mr. Haber said.