A Muslim Child’s Speech in India to Mankind

The following is a text of seven -year-old Soborno Isaac Bari’s prepared remarks to Mankind, delivered on January 6, 2020 at SP Pune University in India.

I am honored to be in India, the birthplace of Mahatma Gandhi, and to be hosted by Savitribai Phule Pune University. Since 1949, India has stood as a beacon of democracy, diversity, and  tolerance and the University of Pune has served as the pinnacle of Indian achievement. I am grateful for your hospitality and the hospitality of the people of India. I am also grateful to the faculty members—especially Professors Avinash Kumbhar and S.V Ghaisas and the students of Pune. Thank you so much for the warm welcome that my family and I have received. It is an extraordinary honor to be here today. I am also proud to carry with me the goodwill of the American people and a greeting of peace from Indian communities from my country: Namaste and Assalamu alaikum.

I received recognition from President Obama in 2016 at 4-years-old for being able to solve advanced math, physics, chemistry and computer science problems. 2 years later in 2018, Harvard University gave me recognition for my contributions to math and science. Therefore, many of you here may be curious why I am promoting “The Love”, a campaign for Peace, Unity, and Respect, even though I’m known for my problem-solving ability in math and physics. As such, I should be solving math problems now, rather than giving a book talk. But I came to understand that peace is just as urgent as math in today’s world. In fact, it was the terror of the Taliban, Islamic State, Jaish-e-Mohammed and Al-Qaeda that forced me to start my antiterrorism campaign, “The Love”, a campaign devoted to promoting global peace and unity. Indeed, to the critics who question why I’m promoting peace instead of solving math problems, how can I solve math problems when 6 Taliban terrorists go to Peshawar School to kill 132 school children including 5 year-old Khula? How can I solve Physics problems when 5 followers of Islamic State go to the Holey Artisan Bakery and kill 29 innocent people including Faraaz and Tarishi? How can I solve chemistry problems when followers of Jaish-e-Mohammed kill 40 innocent people on the Jammu Srinagar National Highway? How can I code programs when 19 Al-Qaeda terrorists hijack planes to kill nearly 3,000 people from my own country, the United States of America? 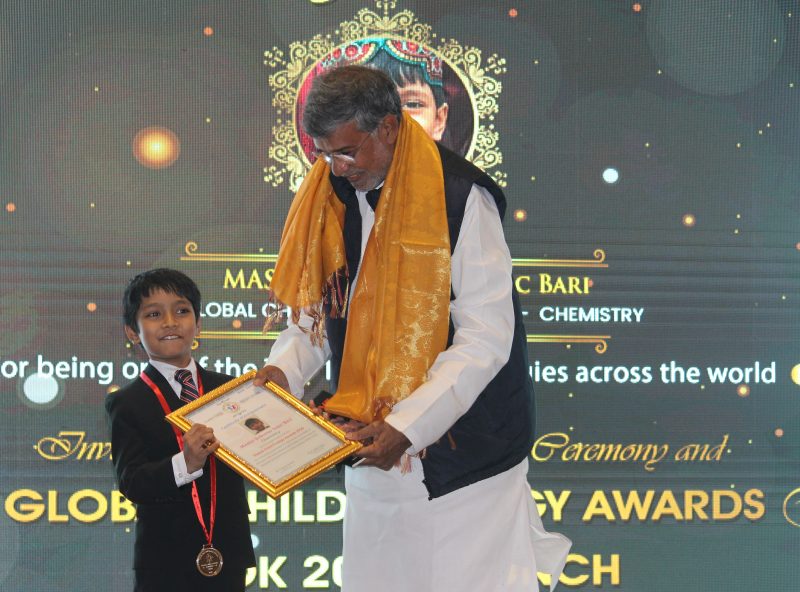 I learned the importance of peace the hard way. On April 9, 2012, I was born into a family that included a 9/11 survivor. On my second birthday, my father took me to 1 Liberty Plaza, where he worked as a security guard from 2001 to 2014. That day, he recollected the events of the most tragic morning in American history. It was September 11, 2001. My father was working at Liberty Plaza, near the World Trade Center. My uncle worked in the South Tower. When news of terror attack broke out, my dad ran to the South Tower like a madman. However, he was caught in the fallout of the collapse of the North Tower as he ran towards the South Tower to find my uncle. My dad couldn’t outrun the smoke and crawled under a van to avoid the debris. The air turned black. He started choking, and his eyes burned. He thought the van above him would move and kill him. Someone dragged him into the van, and he later found himself in a hospital. In a panic, he fled from the hospital and ran towards the Twin Towers again, with the hope of seeing my Chachu, his younger brother. Along with thousands of other terrified people, my father headed north of the West Side Highway. He waited there all day, watching the events unfold, including the collapse of the South Tower, but he did not see his brother. He saw men and women jumping from windows in a desperate bid to escape the fire within the building. He saw them hit the ground and saw their blood on the street. He never forgot all these horrors (although, miraculously, my Chachu survived). Somehow, that story instilled a sense of patriotism in my blood. This patriotism gave me the audacity to ask my dad a question on July 3, 2016, when I was only four years old.

It was July 3rd, 2016. The day began with my dad and I going to the mosque. As we entered the public park, where the prayer was being held, I felt jolly and was ready to celebrate the upcoming Independence Day. All of a sudden, I asked, “Dad, can I ask the Imam to pray for America?” He didn’t expect me to ask such a question, because I was so young. Surprised, he looked at me and said reluctantly, “Go ahead.” He thought that I would not have the audacity to do such a thing in front of hundreds of people at the mosque. But he was wrong. In the middle of the prayer, I stood up, and shouted, “Excuse me, Imam! Can you please pray for my country, the United States of America, because tomorrow is the Fourth of July?” The imam ignored me, and I walked out from the mosque to launch a campaign: The Love. Motivated by the Imam’s rejection, I launched “The Love”, a campaign devoted to the 132 school children of Peshawar School in Pakistan. This campaign is for the 29 victims of Holey Artisan Bakery in Bangladesh. It’s for the 40 victims of Pulwama attack in India. But most importantly, this campaign is for the millions of innocent people who suffer at the hands of terrorism every year.

With the help of the Huffington Post and other publications, I made two documentaries to promote “The Love”: I’m Muslim and I Love America & I’m Muslim and I Love Christmas. Many people joined my campaign around the world — especially people in Bangladesh where two young Muslim students, Sadiyan Lima of Dhaka University and Marjia Farzana of Jahangirnagar University, led the movement on behalf of their respective universities. It inspired people to stand up against the terror of the Islamic State. Zahid Jeebon published my biography, while Kadir Chowdhury Babul and his son went to 64,000 villages in Bangladesh to post 64,000 posters promoting the Love. Recently I published a book with the same title, “The Love” to promote my campaign. But this mission has not been easy; indeed, I endured countless struggles against terrorists and hate groups who seek to silence the message of my campaign. The worst of these attacks occurred in April 2019, an attack that still haunts me to this day.

April 2019. My family and I had arrived at Khaabar Baari, a restaurant in Jackson Heights, New York, to glue a poster for my book, “The Love”, which read:

Suddenly, a group of men began moving very close to me, talking amongst themselves. One of them began talking behind my back, protesting the fact that although I was a Muslim, I had Isaac as a middle name. “He can’t be Muslim,” he told his friends, “because his middle name is Isaac. Jewish and Christian smells come from his middle name.” Thus began a dangerous confrontation, initiated by a man I didn’t even know. He started blowing his cigarette smoke in my direction, forcing me to inhale his secondary smoke. My dad told the man he should not direct his smoke toward us—especially not towards me. But he refused to comply. As I was giving a live-stream talk on Facebook to promote “The Love” and its message, the man blew more smoke in my face. Again, my dad asked him to stop. My older brother, Aporbo, stood between the man and me, trying to protect me. Eventually, my dad tried to defuse the situation , and apologized for naming me Isaac. The man understood this to be a concession but continued to insult me. My mom told the man that my dad was a good man. While all this was going on, I stood next to my brother, making a heart shape with my trembling fingers, in the hopes of inspiring the angry men to stop attacking us through the message of my book: that Love is greater than hate.

On our way home, my father began to make his way to a police station to report the attack. But I protested. “Dad, if you report it to the police, they will arrest those extremists and possibly deport them to Bangladesh.”

“That’s exactly why I’m going to file a police report.”

My eyes filled with tears, and my voice choked. “Dad, please forgive them, because ‘To err is human, to forgive is divine’ ”. I still remember my dad making an abrupt U-turn on Webster Avenue.

At this great University of Pune, I have a message for the world’s 1.8 billion Muslims–especially India’s 201 millions Muslims–that as an American, I sing The Star Spangled Banner every day after I wake up, as this inspires me to keep falling in love with my country—the United States of America. As Indians, you should sing the Indian national anthem every day upon waking up. Stop supporting terrorism, hate, and division. Start fighting for love, peace, and unity. If there is an injustice against you, please forgive. Remember, Gandhi won the world through forgiveness.

I will end this book talk by finishing the story I told you at the beginning: Faraz and Tarishi : A Story of love between Hindu and Muslim.

As I said, 4 followers of Islamic terrorists unleashed an act of terror in Bangladesh on July 1, 2016 when Bengali Muslims were getting ready to celebrate Eid at the end of Ramadan. That day terrorists entered the Holey Artisan, a bakery famous for its bagels and coffee, at 8:00 p.m. and opened fire indiscriminately, killing two police officers, Salauddin and Rabiul Islam, who tried to stop them. They immediately took full control of the restaurant by taking hostages. The seven terrorists had killed 22 hostages, including two friends: Faraaz and Tarishi.

When Nibras Islam, the leader of terrorists, discovered that Faraz was a Bangladeshi born Muslim, he let him go. However, Faraz refused to leave without his Hindu friend–Tarishi. `

“Who is your friend?” Nibras Islam looked pissed.

Faraz pointed his finger to Tarishi. Nibras pointed his gun, smelling something suspicious. He called her up.

“What’s your name?” Nibras asked. His gun was cocked and loaded.

“My name is Tarishi,” she whispered, shivering.

“United States,” she said. Her voice was broken. Her heart beat faster and faster.

“What about Faraaz?” asked Rohan Imtiaz

“Let him go, because he already promised me that he will change his name to Muhammad Hossain.”

I heard Faraaz and Tarishi’s screams as bullets pierced their bodies. Tarishi fell to the floor. Faraaz began bleeding out but still managed to make his way to Tarishi. “I told you, nothing can separate us, even—” But Faraaz never finished his sentence, as another bullet shot through his skull.

Soborno Isaac Bari, a visiting faculty at Ruia College of University of Mumbai, is the author of The Love.