Advertisers to get a glimpse of Apple Watch promise, challenge 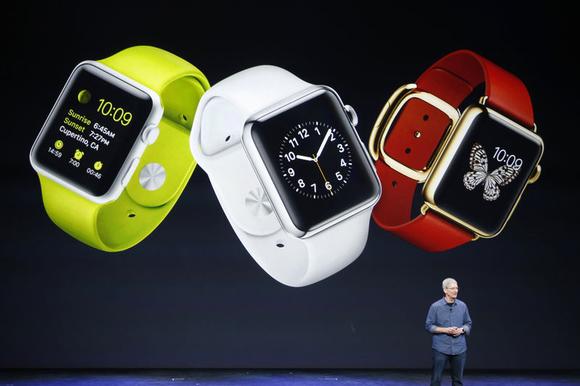 Apple CEO Tim Cook speaks about the Apple Watch during an Apple event at the Flint Center in Cupertino, California, September 9, 2014.

LAS VEGAS (Reuters) – Apple’s forthcoming smartwatch poses a conundrum for advertisers: How to tap the enticing possibilities of the tiny gadget without overwhelming consumers with messages.

At this week’s Consumer Electronics Show in Las Vegas, mobile-marketing firm TapSense plans to release an Apple Watch ad-buying service. The service will provide a first glimpse of how businesses can serve up ads on the watch, even though the gadget will not be available until later this year.

At issue: the same qualities that render the watch exciting to Madison Avenue, such as the ability to detect customers approaching a store and to zap an ad directly to their wrists, also risk alienating those customers.

Apple declined to comment on the use of its watch by advertisers, and will not attend CES officially. But many companies that make devices and services based around Apple products will be there, including several that are working with WatchKit, a software-development tool Apple released in November that allows developers to build watch-tailored applications.

The watch’s main screen allows the display of several tiny icons, including for email, weather, time, and potentially a few favorite service and retail apps.

Businesses could use those apps to notify customers of special deals, but only within already-opened apps, Kumar said. Otherwise, the vendor risks annoying consumers by introducing an ad that is out of sync with whatever they are doing.

If a consumer is using a transit app on the watch to monitor delays, for example, an advertiser could insert a marketing offer that would light up on the watch face for a ride-sharing service or a deal at a coffee shop nearby, Kumar said.

But moderation is key. Push notifications and banner ads on smartphones can be turn-offs. Some marketers advise avoiding showing ads to users who typically click out of them or delivering the same ad too many times to any one user.

“If it feels like your smartwatch is turning into a spam box, you will take it off,” said Padden Guy Murphy, who heads business development and public policy at car-sharing service Getaround.

The startup is exploring using Apple Watch’s location-based features to target new customers. Apple has not added global positioning on the Apple Watch, but apps can track location as the device is tethered to a smartphone.

If a consumer shows interest in an ad, such as raising the wrist for a better look, WatchKit allows for notifications that expand and take up more room on the screen. Conversely, a disinterested consumer could tap an “X” mark to exit the ad, TapSense’s Kumar said.

Communicating through buzzing or vibrations is currently only available on Apple’s own apps on its wearable device.

Whether Apple scores a hit with its upcoming Apple Watch and creates a new mass-market category remains unclear. Venture capitalist Fred Wilson caused a stir last week by predicting the watch “will not be the home run product that iPod, iPhone, and iPad have been.”

But advertisers see potential. They particularly like a watch feature that Apple calls “Force Push” that activates when a user taps the screen with extra pressure, opening up a menu with up to four actions. They envision coupons that when tapped can show directions to a store, for example.

Ad executives hope that the watch can overcome challenges that have prevented location-based ads from succeeding on mobile phones. Unlike on phones, says Jeff Malmad, North American mobile director at media agency Mindshare, users will not need to dig into a bag or pocket to see the ad. They will be right on a user’s wrist, in sight at all times.

But to keep them effective, he says, consumers will need to opt for them, much as many consumers opt to receive email messages from various retailers.