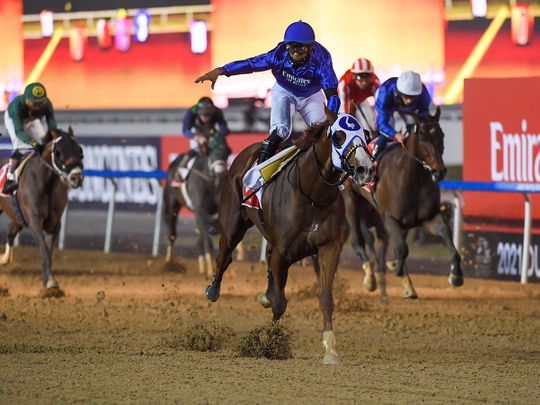 It doesn’t feel that long ago since the racing world was captivating by the 2021 Dubai World Cup, but already connections will be planning their route towards one of the biggest races of the year next year.

The hugely lucrative race will once again attract a starring field, but which runners could be among the leading contenders for the race next year?

The Dubai World Cup returned earlier in the year after being forced to miss out on hosting the event in 2020 due to the various travel restrictions that were imposed due to COVID.

The race is one of the most lucrative available to connections, with $12 million up for grabs in the prize purse for horses to compete for. Fans will have to wait until March next year to see the 2022 edition of the race, and it will once against take place at Meydan Racecourse. Saeed bin Suroor remains the most successful trainer in the history of the race, as he has won on nine previous occasions.

His most recent winner came back in 2019, as Thunder Snow won for the second renewal in a row. The famous horse remains the only ever two-time winner of the race, but his chances of claiming a third straight win were scuppered when the race was cancelled last year. However, one runner could have his eyes fixated on repeating that achievement in 2022.

Back to Back Wins For Mystic Guide?

It is hard enough to pick out the winner of the Dubai World Cup just moments before the race starts, let alone ten months before the horses enter their starting positions.

Nonetheless, such was the dominance that Mystic Guide had in the race last year, it would be difficult to oppose the four-year-old from trying to win the race once again next year.

As we mentioned, only one previous winner has ever been able to repeat their success, but Mystic Guide certainly has all the temperament of a horse that you could expect to replicate that glory.

The Michael Stidham-trained horse was excellent in 2020, as he was in control of the race from the very start. He started in a prominent position, before travelling supremely well throughout the contest.

In the end, it was all about the winning margin that he was going to record, as he finally finished three and three-quarters clear of Chuwa Wizard. The Japanese raider could once again return in 2022, but this American-bred horse would certainly be good value to repeat his glory.

Horses That Could Line Up

It is near impossible to predict the horses that will be traveling to Meydan for the Dubai World Cup at this stage, but there could be some talented American runners that make the trip judging by the races that they have run in already this season.

Knicks Go was a commanding winner against this year’s contender Jesus’ Team, as he won by two and three-quarter lengths in the Pegasus World Cup in January.

However, that was followed up with a rather unconvincing display in the Saudi Cup, as he finished eight and a half lengths behind Mishriff. Irish-trained Mishriff could be a decent chance if he opts for that route, as he followed up that commanding win in the Saudi Cup by winning the Sheema Classic.

The four-year-old has all the ability to compete in the Dubai World Cup, and it will be fascinating to see the route that John and Thady Gosden take with the talented colt.

Here we have it, our early picks for the race next year. To check out Dubai’s 2021 results and other horse racing events visit TwinSpires.com for the latest horse racing results.