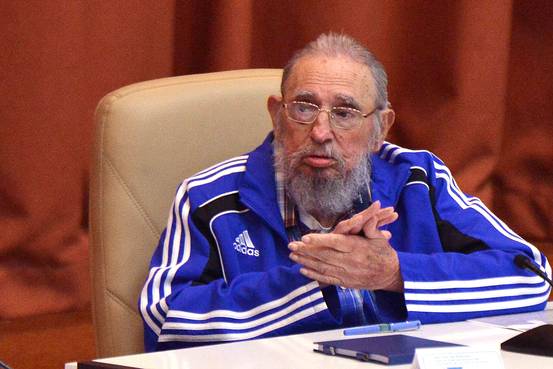 
Fidel Castro burst on the world scene in 1959, spawning the very image of a revolutionary with his scruffy beard, rifle and cigar, ruling Cuba for a half-century while rankling 11 U.S. presidents and helping bring the world to the brink of nuclear war.

Mr. Castro, nicknamed the “guerrilla prince” by one of his many biographers, animated millions in Cuba and across the world with his promises of democracy, social justice and economic progress. Early in his reign, Mr. Castro forged an anti-Washington stance, allying with the Soviet Union and supporting guerrilla movements from Latin America to Africa.

But by the time he formally resigned in 2008 as Cuba’s president and handed power to his younger brother, Raúl, he had come to embody all the contradictions of his movement.

Mr. Castro pursued egalitarian ideals of free health care, housing and education, while outlawing free speech, jailing dissidents and banning fair elections. He played world politics with the skill of a grandmaster, but embraced an ideology that ultimately failed. He overthrew one dictator in 1959 only to become Latin America’s longest-ruling one, 49 years.

He sought to free Cuba of its dependence on sugar and make it a wealthy country, only to bankrupt the island and make it dependent first on the largess of the Soviet Union, and then of Venezuela. But Venezuela’s economic crisis has curtailed aid to Cuba.

When Mr. Castro stepped down, many had hoped the more pragmatic Raul would quickly launch economic and political overhauls to ease Cuba into the global economy and introduce a more democratic system. But he has only taken a few hesitant steps in that direction. Instead, the elder Castro developed a second career as a Cassandra-like commentator, raging against the U.S. and frequently predicting an inevitable nuclear war.

The economic outlook brightened in 2014 when President Barack Obama forged an agreement with Raúl Castro to restore diplomatic relations. Since then, Mr. Obama has gradually loosened curbs on American trade and travel with the island, though a full lifting of the economic embargo is in congressional hands. However, the prospect of better economic ties with the U.S. now looks difficult after Donald Trump won the recent presidential election.

With Fidel now dead, many believe Raul will move more quickly toward reforms.

Fidel Castro was born in 1926 in Biran, a frontier town on the island’s wild eastern tip, the illegitimate son of a former Spanish soldier and peasant who had become a rich landowner, and his maid. One of seven children, Mr. Castro’s father sent him to Havana to study at Cuba’s best schools.

In Havana, he got involved in the violent student politics of the time, eventually becoming a gun-toting law student and self-described “man of action.”

After a short flirtation with electoral politics, he turned to armed revolt to depose Cuba’s dictator, Gen. Fulgencio Batista, who had come to power after a military coup in 1952. On July 26, 1953, Mr. Castro led some 135 followers, including his brother, Raúl, in a daring, but disastrous, attack on the Moncada army barracks in Santiago, Cuba’s second-largest city.

More than 60 of Mr. Castro’s companions were killed. Mr. Castro survived and sent to prison after electrifying Cuba with an eloquent courtroom speech in which he famously declared: “History will absolve me.”

Granted amnesty after serving 19 months, he went to Mexico with Raúl, where he assembled a small band of followers, including an Argentine doctor named Ernesto “Che” Guevara. In 1956, Mr. Castro and 81 other men crammed into a 60-foot yacht, the “Granma,” and landed on the beaches of eastern Cuba.

Only about 20 of the guerrillas, including the Castro brothers and Mr. Guevera, made it past Cuban soldiers to the island’s rugged Sierra Maestra mountains. But the small group recruited enough peasants and scored enough victories against Mr. Batista’s demoralized army to force the dictator to flee the country on Jan. 1, 1959. A week later, a cigar-chomping Mr. Castro, then 32, entered Havana atop a tank, where he received an enthusiastic welcome from thousands of Cubans, whom he promised a “humanistic” government.

From his earliest days, Mr. Castro had been enthralled with the conqueror Alexander the Great, whose name he took as his nom de guerre while fighting the Batista regime. That outsize sense of destiny, combined with a deep hatred of the U.S. for its domination of Cuba since the 1898 Spanish-American War, helped turn Mr. Castro into a fierce opponent.

“The Americans will pay dearly for their actions,” he wrote to a confidant months before the rebel army marched into Havana. “When this war is over, a much longer and greater war will begin for me, the war I am going to wage against them. I realize this is my true destiny.”

Mr. Castro was true to his word. He embraced the Soviet Union and relations with the U.S. quickly deteriorated. In October 1960, Mr. Castro confiscated all large businesses in Cuba. Thousands of frightened Cubans fled the island.

In April 1961, at the Bay of Pigs, Mr. Castro’s militia defeated an invasion force of 1,500 Cuban exiles trained by the Central Intelligence Agency, after the invaders ran out of ammunition. The victory boosted Mr. Castro’s international prestige and marked a low point for the administration of President John F. Kennedy. After defeating the exiles, Mr. Castro consolidated his power, rounding up and imprisoning thousands of political opponents. Many more fled to exile.

“I’m a Marxist-Leninist and shall be one until the day I die,” Mr. Castro announced in a speech later that year. He sealed a strategic alliance with an expansive Soviet Union which—sensing U.S. weakness—provided nuclear missiles to the island ostensibly to defend against another possible invasion. But most of the U.S. were within the missiles’ range.

Their discovery a year later led to a tense showdown between the two Cold War superpowers—bringing the world the closest it has ever been to nuclear war. It ended when the Soviets removed the missiles.

A furious Mr. Castro, left out of negotiations between the U.S. and the Soviet Union, ordered University of Havana students to chant “Nikita, mariquita, lo que se da no se quita,” or “Nikita, sissy, what you give you should not take away.”

Cuban troops fought alongside Syrians against Israelis in the Yom Kippur War of 1973, and trained the troops of South Yemen’s communist regime.

“Fidel put revolution on the agenda of the Latin American left and tried to foment it and impose it everywhere,” said Jorge Castañeda, a former Mexican foreign minister and expert on the Latin left. “It was a tragedy. Tens of thousands of peasants, priests, students and intellectuals died in a bunch of crazy attempts at revolution that didn’t have a chance.”

Mr. Castro’s greatest successes were in Africa. Starting in 1975 after Angola gained its independence from Portugal, and continuing for more than a decade, more than 200,000 Cuban soldiers rotated through the former Portuguese colony, where they successfully fought in support of a Moscow-backed faction’s bid to control the country against factions backed by South Africa. Nelson Mandela, a longtime Castro ally and friend, credited Cuba’s military support for helping end apartheid in South Africa.

Mr. Castro’s global influence peaked in 1979. The year started propitiously for him, as Cuban-backed Sandinista guerrillas overthrew Nicaraguan dictator Anastasio Somoza, but it ended in ignominy. Mr. Castro, as head of the nonaligned movement, defended the Soviet invasion of Afghanistan, which marked him as a Soviet puppet, rather than an independent man of action.

While Mr. Castro’s mind was on world revolution, social and economic conditions had deteriorated in Cuba. Many Cubans were becoming fed up with his economics of communist austerity.

In April 1980, a Cuban guard was accidentally killed when a group of Cubans seeking asylum burst into the Peruvian Embassy in Havana. When the Peruvians refused to hand over the asylum seekers, Mr. Castro, in a fit of pique, removed the guards from the embassy. The regime was caught off guard when, in a matter of hours, more than 10,000 Cubans rushed into the diplomatic compound.

An angry Mr. Castro invited all Cubans who wanted to leave for the U.S. to do so. Seeking to portray the asylum seekers as delinquents, he emptied Cuban prisons and put many criminals on board a massive flotilla of boats manned by exiled Cubans who arrived at the port of Mariel, hoping to pick up relatives. By the time the exodus stopped later that year, 125,000 Cubans had left the island.

In the following decade, as reformists under Mikhail Gorbachev took power in the Soviet Union and the Cold War wound to its end, Mr. Castro stubbornly resisted the liberal ideas coming from Moscow. Soviet military and economic support for Cuba dwindled. Increasingly, the only weapon left in Cuba’s arsenal in its continuing face-off with the U.S. was the threat of more Mariel-like explosions of uncontrolled emigration.

After the Soviet Union imploded in 1991, the Russians ended all subsidies to Cuba. As Cuba’s economic output fell by at least 35%, Mr. Castro declared a “special period in peacetime” of strict rationing.

With the government’s survival at stake, Mr. Castro reluctantly authorized the use of the U.S. dollar in 1994 in parallel to the Cuban peso and opened the island to limited foreign investment in areas such as tourism. In recent years, the late Venezuelan president, Hugo Chávez—and his successor Nicolás Maduro—replaced the Soviet Union as Cuba’s life-support system, sending an estimated 100,000 barrels a day of cut-rate oil and refined products to the island and allowing Mr. Castro to roll back economic overhauls.

In return, Mr. Castro, who used to send soldiers in support of Soviet goals, sent Venezuela tens of thousands of doctors, dentists, sports trainers, intelligence agents and other technicians who have been crucial in aiding the Venezuelan leader’s regime. But Venezuela’s economic aid to the island has fallen sharply due to the oil-producing country’s economic meltdown in the last two years.

For all his political skills, Mr. Castro pushed oddball economic theories during his long tenure. In his effort to create a selfless “New Man,” he tried to abolish money for a time. Later, he tried cloning a super milk cow, Ubre Blanca or “White Udder” and promoted another program to create midget cows for distribution in Cuba’s cities as a way of solving the country’s endemic milk shortage.

Amazon’s Tax Dispute May Be Destined for the Supreme Court