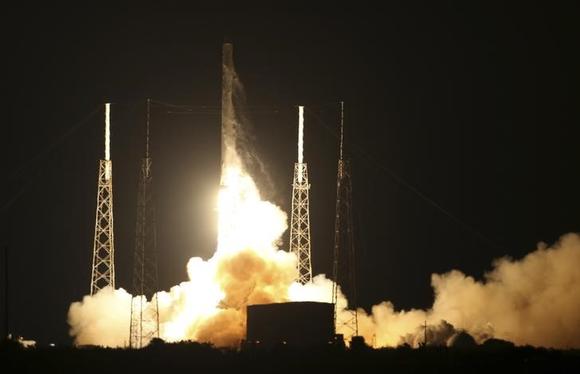 The unmanned Falcon 9 rocket launched by SpaceX on a cargo resupply service mission to the International Space Station lifts off from the Cape Canaveral Air Force Station in Cape Canaveral, Florida, January 10, 2015.

CAPE CANAVERAL, Fla (Reuters) – An unmanned SpaceX rocket blasted off on Saturday to deliver a cargo capsule to the International Space Station, but narrowly failed a novel test to land itself on a platform in the ocean, the company said.

“Rocket made it to drone spaceport ship, but landed hard. Close, but no cigar this time,” Elon Musk, founder and chief executive, said on Twitter.

The returning rocket ran out of hydraulic fluid to operate its steerable fins, Musk wrote later. “Upcoming flight already has 50 percent more hydraulic fluid, so should have plenty of margin for landing attempt next month,” he added.

Space Exploration Technologies, the company’s official name, has been working to develop a rocket that can be easily refurbished and reflown, potentially slashing launch costs.

NASA used to recover and reuse the space shuttle’s twin solid rocket boosters, which splashed down into the ocean under parachutes. Recovery and refurbishment, however, was time-consuming and expensive.

SpaceX’s idea is to fly its rockets back to the launch site and touch down on landing legs. Saturday’s test was the first time a Falcon 9 rocket attempted the touchdown on a platform in the ocean, away from populated areas.

In addition to four landing legs, the rocket was outfitted with four grid fins to stabilize the booster during its descent.

“Grid fins worked extremely well from hypersonic velocity to subsonic, but ran out of hydraulic fluid right before landing,” Musk wrote on Twitter.

The primary purpose of Saturday’s launch, the 14th of a Falcon 9 rocket, was to send a Dragon cargo ship on its way to the space station, a $100-billion laboratory that flies about 260 miles (420 km) above Earth. It was expected to arrive on Monday.

The rocket blasted off from Cape Canaveral Air Force Station in Florida. The discarded 14-story tall first-stage booster apparently hit its target – a floating platform located about 200 miles (320 km) off the Florida coast – then broke into pieces.

The Dragon capsule is loaded with more than 5,100 pounds (2,300 kg) of food, supplies and equipment, including an instrument to measure clouds and aerosols in Earth’s atmosphere.

SpaceX is one of two companies hired by NASA to fly cargo to the station following the retirement of the space shuttles in 2011. However, the second firm, Orbital Sciences Corp,was sidelined in October after its Antares rocket exploded minutes after liftoff.

Saturday’s launch was the fifth of 12 planned station resupply missions by SpaceX under its $1.6 billion contract with NASA.