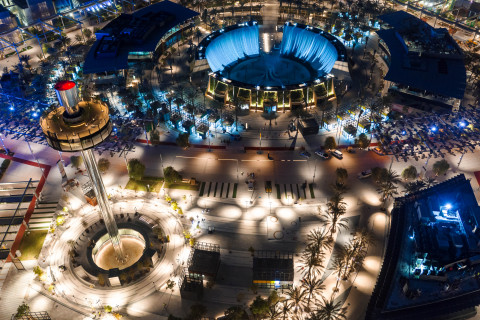 The new water feature is a star attraction at Dubai Expo 2020. Thunderous music, climbing and falling water waves, synchronised with haunting melodies, combine to weave a certain magic for the spectators. The mechanics of the installation creates the illusion that the water is shooting in reverse from the sides as it rises above spectator’s heads before falling to their feet. The installation is eco-friendly, wasting no water aside from what evaporates during the spectacle.

The show was unveiled at the opening of Expo 2020. The water feature’s lower plaza area is almost the size of half a football field, with water walls more than four stories high. Situated between Al Wasl Plaza and Jubilee Park, the Expo 2020 Water Feature combines the elements of water, earth and fire in a way that will both surprise and delight the senses. It is one of the largest and most technologically advanced installations for the Expo.

It has been put together by WET, an integrated architecture, design, manufacturing and engineering firm based in Los Angeles, that has created immersive, experiential large-scale water features around the world.

“This feature is a series of firsts. As the first of its kind, it offers a respite designed to evoke wonder and awe for visitors. The water is choreographed to move to the sounds of the original music score created by Ramin Djawadi, who composed the Game of Thrones among other well-known works, another first,” emphasized Mark Fuller, CEO of WET.

“Here is a place where nature plays and performs—where the magic of the world, hiding just beneath nature’s cover, reveals itself to each Expo visitor. It is a magnificent creation that has been in the works for more than three years and to see it come to fruition is truly an amazing experience.”

The Expo Water Feature’s music is unique; musical fountains the world over are choreographed to existing music. In the opposite way, movie soundtracks are scored to already filmed movie scenes. But here, the visual synchronicities of the feature were simultaneously born, side by side, with the creation of the feature’s music—a world creative first. Each surge of water is released on a musical cue, creating an orchestral masterpiece performed by the London Symphony Orchestra. The original score was written by the award-winning composer Ramin Djawadi, whose work includes the theme music for the HBO series Game of Thrones, which earned him Grammy Award nominations in 2009, 2018 and 2020.

Located near the center of Expo, the circular-shaped water walls enclose a plaza which houses observation benches and seating areas. At the top of the feature’s towering stone walls, white water waves arise from nowhere. They leap and cascade downwards to the themes of the thunderously beautiful music that fills this arena of nature, then disappear into the floor. The Expo 2020 Water Feature and its surrounding landscaping and architectural elements are arranged in a way that connects people through dynamic movement inside the park, while also allowing interaction between adjacent spaces.

Three openings slice into this volcano-like structure, offering entry to its core and three viewing platforms – situated on approximately the third-floor level – allow visitors to see down into the arena for a birds-eye view of the stunning vista.

At one of the openings, the towering sides of one slice reveal strata of glistening stone, with shades of sapphire blue streaking through. The stratified walls of the next entry are streaked in ruby red, and the third shimmers with traces of a golden yellow. Playful waterfalls tumble down its outer sides that are covered with lush flora.

Stone stairs lead down to a massive walled court, flooded with music. Around the visitors, water cascades down the surrounding walls in patterns of falling waves. At the center soars a twisting sculpture: six towers spiralled together that look pulled from the earth like taffy, then frozen to stone by some immense force. The centre spire shoots colourful blazes of fire that provide both warmth and a glow, illuminating visitors’ faces.